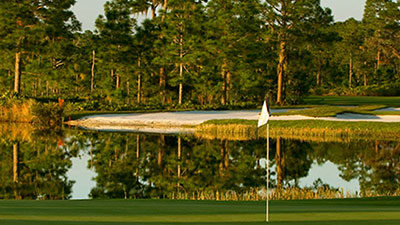 Posted at 15:22h in Case Studies by targetmarket

Terry Kennelly, superintendent at The Concession Golf Club in Bradenton, Florida admits that he was very skeptical about trying PC Drainage. “You take a look at this piece of one inch rope, and you think, now how in the heck is that going to work versus a piece of ADS pipe,” jokes Kennelly, “but now, if anyone were to ask me about it, I would be PCD’s biggest proponent!”

“We have these three greens that we always struggled with the runoff on the low sides, really since day one of construction. These greens are heavily contoured with flat pipe underneath, that is probably less than desirable, and we just continually had problems,” explains Kennelly. “It may have taken a good six to seven weeks after installation before we saw the impact from PC Drainage on the turf , but as I look back six months later, the low sides of our greens have never been as good as they are now and the only thing we’ve done different is install the PCD.”

“The biggest advantage of PCD,” says Kennelly, “is it’s very non-intrusive to the greens. For clubs that have a large amount of play, disruption is an absolute minimum. We literally took out a hex-plug and put the vibratory plow in. Probably the most work was to dig up the 4 inch pipe to tie in the PCD.”

Kennelly explains. “If you install a normal drain system you are removing the heavy soil, the organic, and you are backfilling with sand, so the percolation rates will probably double or triple just by taking out the old material and putting in the new sand, but the downside of the conventional drainage is you have a lot more disruption to the surface.

“The trade-off to immediate results is the three most important factors of anything you do on the golf course – cost, time, and the affect on playability,” states Kennelly. “With the installation of PCD, I had golfers back on the greens the next day. You could see the little slit, maybe a quarter to a tenth of an inch wide, but that doesn’t affect any playability, so playability is a non-issue. The cost of PC Drainage is a quarter or less than the cost of conventional drainage and installation is much quicker too. We installed a thousand feet of PCD in a day – you can’t do that with conventional drain pipe.

“With drainage, in my opinion, it’s a long term thing you hope you don’t have to deal with anymore. It’s a trade off. You want it to work, but at the same time, when you’re affecting your putting surfaces; you want it to have as little disruption as possible. I was apprehensive,” says Kennelly, “but now I’m convinced. When you can install a thousand feet of PC Drainage in one day, it just seems like a no-brainer!”