29 May ‘Anyone with pedigree has played at Wentworth, from Nicklaus to Tiger – and now me’

Posted at 10:00h in Press by targetmarket 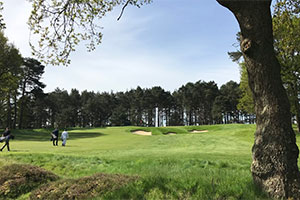 Shortly before this week’s BMW PGA Championship, club golf editor Steve Carroll pitted his wits against Wentworth’s mighty West course. You won’t need to guess who came out on top.

I will go to my grave able to say two things. I striped a drive on the first and parred the last at Wentworth’s West course.

The less said about the rest the better. But what does it matter? To play in this corner of Surrey is to immerse yourself in golfing history.

You’re unlikely to ever play at Wembley, or move serenely across Centre Court, but if you ever get the chance to play Wentworth you can tee it up – metaphorically at least – with the greats of the game.

Anyone with any pedigree has played here – from Hogan, Snead, Nicklaus and Palmer to Seve, Faldo, Tiger and McIlroy. And now me.

The course of today is a very different beast from yesteryear. Twelve months ago, a multi-million pound renovation was unveiled to the world at the BMW PGA Championship and blew the critics away.

They’d not been shy aiming their barbs before, but they were silenced by the changes. All 18 greens were reseeded and returfed with creeping bent grass – and SubAir systems were installed to regulate speed and firmness.

Four greens were rebuilt and a further five were altered. Some 29 bunkers were removed altogether, and every other was redesigned or rebuilt.

It debuted with a splash, helped in so small measure by Alex Noren’s thrilling final day course record 62 on his way to taking the title.

I had no illusions of getting close to the Swede. For a start – apart from bending the rules on some very specific holes where we all wanted to play out – we were competing in a Texas Scramble.

On the face of it, that seemed a massive positive. Last year, I scored a measly 23 points in an individual competition but it was possibly the best 24-over par return I’ve ever recorded.

This time, it wasn’t supposed to matter if I hit in the rough as I had three other teammates upon which to lean.

Best laid plans, and all that.

We still contrived to find some outstandingly difficult positions, such is the challenge posed by this Harry Colt classic.

Much has altered in the year since director of courses Kenny Mackay and his team put the final spade down on European Golf Design’s alterations.

The greens were stunning a year ago, but the new grass had yet to fully blend with the surrounding turf.

Now the colours have worked in beautifully and it continues to feel like you’re walking on carpet.

They were so perfect, I felt guilty stepping on them. Some of the slopes – particularly from the upper tier at the 3rd – were plenty quick enough for me.

I can’t even imagine how much faster they can get on tournament week.

As a player that can’t rely on even half of a tour pro’s power, the West feels to me like a second-shot golf course.

It’s quite a fun place to unleash the driver as, although there are plenty of trees, they don’t encroach as tightly as you might expect.

That means if you can avoid the strategic bunkering, you can find yourself standing in the middle of a fairway and feeling very pleased with yourself.

But the fun is just beginning. We were playing off the yellows and, at 6,604 yards, it was actually shorter than my home course off the medal tees. The championship tees, meanwhile, are an imposing 7,267 yards.

The challenge, though, is trying to reach the putting surface at all or – if you do – making sure you hit the right spots.

Take the par 3 14th as an example. It runs at 157 yards off the yellows but it’s gradually uphill, with quite a camber in front of the green and two bunkers waiting to swallow up anything offline.

You’ve got to be very accurate with an iron in your hand, and equally as deft with a putter on a surface that slopes largely back to front.

Even the semi rough is sticky. You can advance your ball but if you are 180 yards away and needing to hit an undulating putting surface, with fast run off areas on either side, you’d be better off praying than taking 5-iron.

Go further into the deep stuff and come armed only with a gap wedge.

The 7th, and the redesigned 8th, have to be my favourite holes. The former is a classic Colt vista among the heather. The drive looks tighter than it is and dips towards a burn before rising majestically towards the green.

The latter was notorious before the changes but now it’s a fabulous shortish four. If you can put your drive into the narrow part of the fairway – which I did – then the green opens up.

You hit your approach over a pond to a green that cambers back to the water and it’s the type of shot that reminds me why I play this game.

Much of the vitriol about the old set up was saved for the closing hole and it’s definitely a Marmite experience. I’m firmly in the ‘love it’ camp, relishing the challenge of trying to hit and hold the green.

I’m not, of course, trying to get on in two but I find the exercise of striking that third shot, with the backdrop of the stands, to be utterly exhilarating.

So did our team win? No. Even with a trio of shots to go at on every hole, we weren’t exactly peppering greens in regulation.

But the experience of playing here is hard to describe in words. The hair on my arms stands up just thinking about it.

That is what the West course gives you. It’s damned difficult, but it’s brilliant. As Europe’s best will discover once again this week.